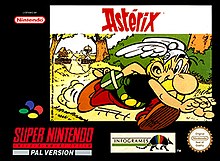 Astérix is a 1993 platform game for the SNES it was both made and published by Infogrames, there was also NES and Game Boy versions of the game but as far as I know these were made by a Spanish company called Bit Managers (they were still published by Infogrames though). The games are based on the comic book series Asterix. An interesting little fact about This game is that it was only made available in Europe so it’s one of the few SNES games to be a European exclusive, basically because most of the other regions would have sat there going ‘’who the heck is Asterix?’’

Having grown up watching Asterix animated films I have a lot of love for the world that’s contained within them, I have always been a big fan of the characters contained within it especially Asterix’s best friend the big chubby but mighty Obelix. This is where the game gives me my first mighty kick to the testicles as the story for the game is basically that Obelix, has been kidnapped by the Romans, and it is up to you as Asterix to save him and bring him home to your village. This game came out in 1993 one year after Konami brought out an Asterix arcade game and arcade game that I was very fond of for many reasons. It was based on the same French comic series but you got to play as either Asterix or Obelix, in a final fight style 2d walk along beat em up filled with awesome graphics full of charm. Now it might seem harsh to judge a SNES  game against an arcade machine but remember in 1992 we had seen an almost arcade perfect port of Street Fighter 2 the world warriors so we had seen what the SNES was capable of given the right people for the job.

So stick with me here, I turn on the game and find I have to be Asterix, it’s not so bad, then I learn it’s a 2D platformer fair enough there have been some darn good ones especially on the SNES but then I see the graphics and I am not exaggerating here this game could essentially be recreated on the master system graphics wise, the sprites are small and rather basic, the backgrounds are also pretty darn basic just enough colours and shapes to make out some sky with white clouds and grass and a bit of water, the foreground is better but once you’ve noticed how basic the background is you can’t really unsee it. Having played the Master System Asterix game from two years before this I actually think it has a better Asterix sprite.

To be fair to the games graphics there are a fair amount of different enviroments including the Gaul forests, the Swiss Alps, Egypt and of beign an Asterix game Rome.  The real problem with this game is that Infogrames did not bring a single new idea to the gaming table. So what you have here is a basic 2d platformer with basic graphics. There are cool little visits from characters like Dogmatix or Cacofonix, who will do  something to help you against the Romans for example Dogmatix will bite the nearest solider on the bum taking him out of the action, its animated well and raises a smile
Asterix starts off easy as anything but as it goes on it can get quiet challenging in places, sometimes it is in fact a little frustrating, this can be due to the placement of enemies and the unsureness of how it wants you to proceed. Add on to this that unfortunately there are some occasions of flawed collision detection and you have a bit of a flawed game here. The music is pleasant enough but some of the sound effects are very basic. Overall this game feels kind of well like a budget title.

If you really like Asterix or Platformers then feel free to give this game a bash but there are a lot better games out there. I would give this game a 6 out of 10, it’s functional, enjoyable but was never going to set the world on fire. If you want to try this game a loose cart goes for around the £10 to £13 price range. I would add though that if you’re a multi format collector you could probably get a copy of the Master System Asterix boxed for this price and I feel it is in fact a much better more enjoyable game (Never thought I would be recommending a Master System title over a Super Nintendo game) I would happily give that game a 8 out of 10 and a heavy recommendation, actually talking about it is making me wish I still had it.
at October 08, 2015

My game today is Mortal Kombat the arcade fighting game developed and published by Midway (in 1992) It was subsequently released ...